These are CGM figures, the poses are a little wooden and too similar but they painted up ok and represent two of few allied cavalry regiments actually present at Quatre-Bras. The light blue figures are the 6th Dutch hussars and the green figures are the 5th Belgian light dragoons. These were commanded by General Merlin who later died at Waterloo. This brigade performed well enough but was later pulled back into reserve after several encounters with the French. Thanks to the similarity of their uniforms with the French, the 5th dragoons were fired on by the English infantry mistaking them for Chassuers a' Cheval! I usually only base divisional generals but I'm tempted to paint up Merlin to go with these guys. I'm waiting for some GMB flags to complete the units. 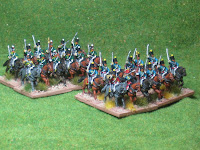 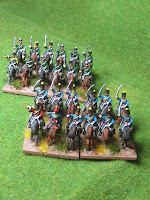 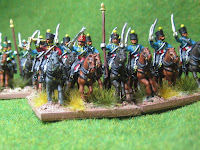 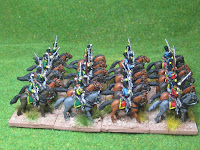 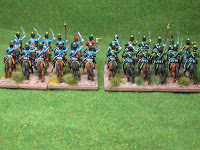 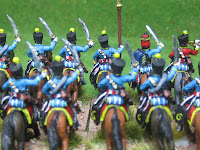