I foolishly agreed to umpire a game of Blucher at the club last night and with it being the 16th June it had to be Quatre-Bras! I've had no experience of playing Blucher so hence the word foolish! I read the rules several times and thought I got the jist of it but that fell apart once combats started.

Darrel and Peter were the allies and Ian and Paul were the French. I used the scenario from the Blucher website (by Sparker), and it did a pretty good job of scheduling the troops, starting at turn 16 and ending at turn 30. The only thing I disagreed with was the immediate availability of the cuirassier brigade, and I gave a foot artillery battery and a horse battery to the allies.

To keep things simple I did not use hidden units, unit characteristics or characteristics for the commanders -  except allowing an extra combat die if attached to a unit.

Main events were the aforementioned cuirassier brigade getting hit by the Dutch battery losing four strength points one lucky bombardment. The Prince of Orange was attached to Merlens light cavalry brigade which suffered casualties and the poor old Prince became a victim himself which really pleased Marshal Ney (Ian). We ran out of time but the allies held Quatre-Bras and the French held part of the road to Ligny, so hence a draw. There are not many pictures as I hadn't much time in between thumbing through the rule book and offering advice.

Hard to say what I make of them - rules are a bit more complicated than Grande Armee, I probably should have played a couple of game before doing this. My worst mistake was misinterpreting the reserve move, I thought it was 8 BW but is in fact 12 BW !!!! This is why we ran out of time at the club to complete. Basically the French were taking too long to march up.  I think giving a few more tries would do it justice, assuming the guys at the club will still speak to me. 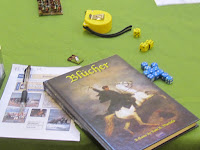 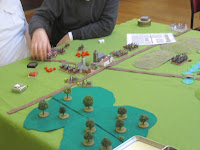 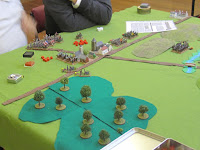 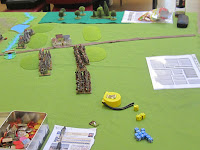 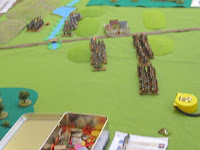 Completed these guys for our Quatre-bras game on Tuesday night. These are CGM figures (from Spain) and are generally ok, although I think the sculptor had difficulty with the czapkas, AB's they ain't but price wise I can't complain. They came with separate lances but these were without pennants, so I discarded them and used some metal lances (25mm spears?) from North Star, the pennants are from ordinary photocopier paper and cut to size. 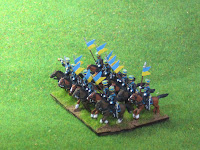 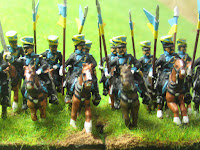 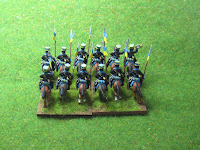