They are quite good figures to paint with plenty of detail. These six represent my first men-at-arms, four of them are in fact the HYW personality set consisting of the (left to right) Duke of Orleans, the Marshal, the Constable and Guichard Dauphin (Master of the Kings Household). The two on the end are men-at-arms. I used Citadel Six shield transfers on these guys (identifying them as Lords Crequy and Dampierre) and also the surcoat badges on the Marshal. I did however, paint the shield of Dauphin. I painted up two standard bearers, one for the Constable and the other is for the Count of Eu. All are based on 20mm (I used 25mm on the Pavasiers) MDF bases. Flags are by Maverick Models. 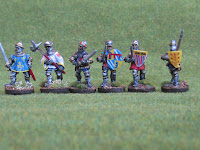 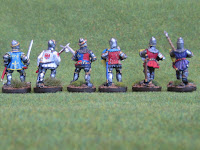 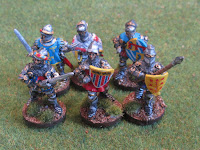 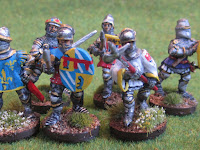 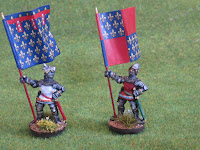 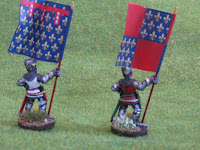 These are Foundry figures (8 of them), I based them on my few remaining poker chips I purchased from Asda many years ago. I added a small 7mm dice frame just in case they may be used for other rulesets that track casualties. I also painted a Front Rank standard bearer, he's from their WotR range, they sent him by mistake but I liked the figure I decided to keep him. I also managed to paint a Fleur-de-lis on his coat. 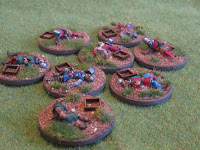 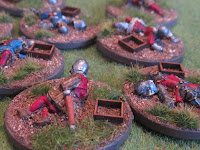 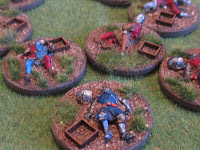 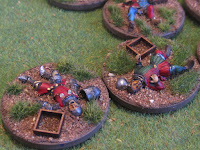 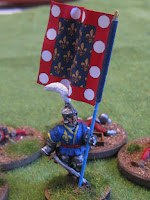 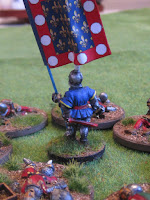 I've just completed a unit of 12 Perry Pavisers, these are French HYW figures. They painted up very easily, although the faces were a bit small and have little detail to paint. What really sets these guys off are the amazing transfers from Little big Men studios. The Lion is the symbol for the city of Lyons militia  and the Lamb, indicates militia from the city of Rouen.The transfers were very easy to apply, simply cut out and with the fingernail remove the clear plastic cover and apply the sticky side to the shield, use a few drops of water to get rid of the white paper backing and Voila!

I'll think I'll paint up another unit to use up the rest of the transfers.

Next to be completed are eight 'battered' markers, these are Foundry casualties. 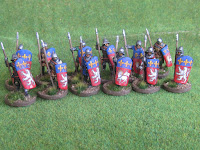 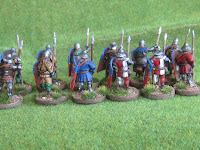 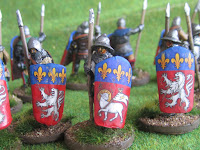 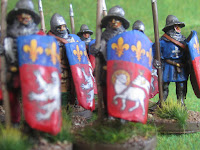 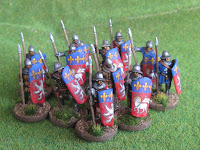 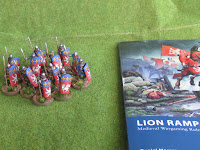 It's been several months since I last touched the brush and paint, it was July to be precise when I completed my last unit. For some reason I've just been unable to paint anything, no motivation at all. However, I've been very active on the gaming front, I've played three games of Blucher at the club and many, many more games such as Spearhead, Deadmans hand, Saga, and play tested several times a rule set called BattleFactor.

Well in order to rekindle my interest in painting I've bought in some Perry and Front Rank Hundred Years War figures (28mm). Maybe I need a change from Napoleonic crossbelts and blue coats.  I've heard some good things about the Lion Rampant rules and so have started to build up a retinue. Rather than build an imaginations unit I've went for 100 years war french army. So I've primed some Perry infantry with the large shields (Pavises). I was attracted to these when I saw the absolutely stunning Little Big Men transfers for the french militia.

Fingers crossed I can complete these figures very soon and then maybe get back into churning out the figures like I used too!
Posted by Ken at 18:22 6 comments: