I bought a shed load of Prussian cavalry a few years back and never got round to painting them all up. Here is the 8th Prussian Dragoons, a unit that saw action in the hundred days. They have yellow facings and I was damned sure that a second regiment had yellow facings also but no - I checked one of the online resources and only the 8th had yellow, never mind! These are AB figures and the flags are from Fighting15s and I'm not even sure if the flags are for these specific regiments. However, I'm happy enough with them. 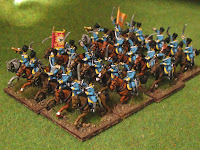 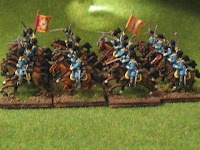 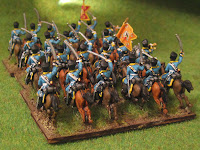 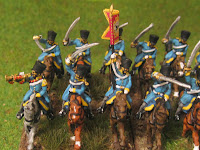 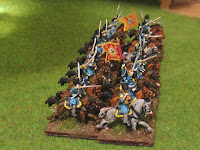 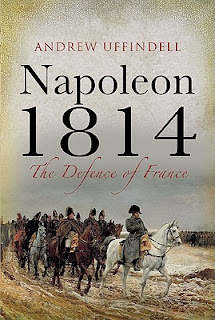 In the New Year (like many others I suspect) I am planning on wargaming the 1814 Campaign in France. I will simply be taking each battle in turn using the OOB's based on the approximations found in Andrew Uffindels book and various scenarios that have appeared on the web over the last few years.

This means of course painting up Russians, Bavarians and Austrians! Given the lack of time as the battles started in late January I will be using the brigade as the basic combat element. I already have the French and Prussian forces although will need to paint up the old guard infantry units. This will give me something to work towards as I spend very little time gaming, so there is motivation to eventually drop the brush end of January next year and pick up the dice!

Since the scale will be grand tactical I will probably use Grande Armee, I have other rule-sets such as Snappy Nappy (gotta love the name) and DBN, but I'm not so familiar with these. I may tinker with Grande Armee's combat system by limiting the number of combat dice a brigade can use. Often a strong unit can steamroller all opposition despite the fact that the reserve battalions in the brigade would not be in a position to attack the enemy. There have been some interesting posts on WD3 to that effect.