All my painted 15mm Men

Here are all the completed French and Prussian forces. The French have 416 Infantry in 13 units the Cavalry have 64 troopers in 3 units, along with 8 skirmishers, we have 16 artillery men in 4 batteries and 2 command bases with 5 men.  This gives a total of 509 French.

The Prussians have 5 Infantry units of 128 men, 16 skirmishers, the Cavalry have 4 units of 80 men and 4 batteries with 16 men but no command bases. This gives a total of 224 Prussians.

This gives a grand total of 733 painted 15mm figures. As you can see, my army's are unfinished as they are highly unbalanced in terms of unit composition and I can't as yet play a proper game with them. The last game I had was a mixture of 1/72 plastics and 15mm.Not ideal but I just had about enough units to refight the battle of Ligny.

The kitchen table! The buildings are by TimeCast and are 6mm. Perhaps I should have gone for 10mm but wanted to have several buildings so they would look like towns and villages. These are based 2-3 and 3-4 houses on 100x100mm MDF bases. The river is painted on many sections of hex tiles  - see earlier blogs for details. 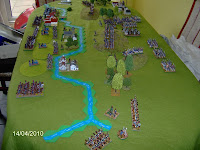 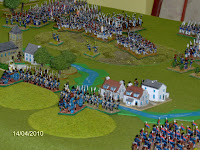 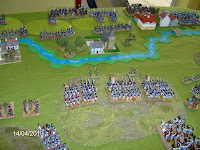 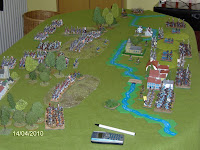 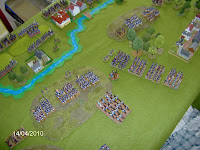 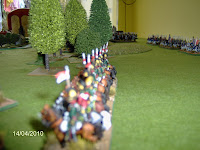 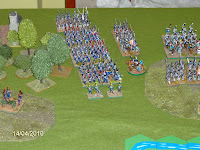 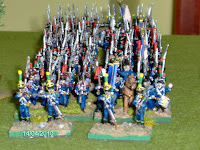