These are CGM figures, the poses are skimishing and are based a bit different to my usual style. Since I wanted them to act as a skirmish screen but also to deploy as a normal regiment I based these in groups of four on  40 x 20 base. The flag was printed from NapFlag, basic scatter grass was used. They have black crossbelts, which is a bit drab but I have given them off-white straps for their muskets.

The 27th Jaegers were part of General Perponchers 2nd Dutch-Belgian division. They fought at Quatre-bras and Waterloo.Positioned to the east of Gemioncourt farm, the majority of the 760 men were raw recruits and not well versed in light infantry tactics.  They were dispersed over 3km of front (from Gemioncourt farm to the Materne pond) and were to act as an early warning system when the French advanced. They fought well but according to the Mike Robinson book they were at times out skirmished by the experienced French light infantry. They are a welcome addition to my Dutch-Belgian army. 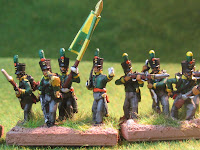 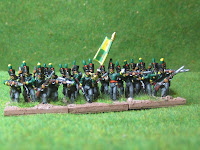 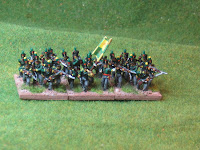 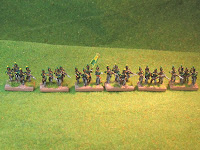 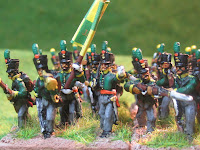 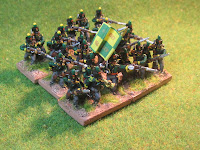 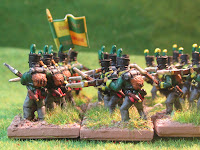