Last night at the club we played with the DBN rules for the first time. Fortunately, Ian had access to another copy and spent the night before reading up. He used to play DBA many years ago and so understood the systems. The scenario was kindly supplied by Alex one of the designers of DBN, my only modification was to use double bases to plump up the units. We felt time was against us, so decided on using the basic rules without attrition.

The battle of Ligny was possibly Napoleons last victory, 60,000 french faced off against 80,000 Prussians. I played the part of old Blucher and used the historical setup with III Korps with its preponderance of Landwehr units taking up post on the Prussian left flank. I Korps was guarding the Ligny stream and occupied Ligny itself, while II Korps stood just behind it in reserve.

My opponent of course decided on a slightly less historical setup and came at my left flank with Vandammes corp and the imperial guard! Gerard was used to attack Ligny and the stream either side. While Grouchy used his cavalry against my right flank.

We started at 7:00 and packed up at about 9:50, Ian (Napoleon) had almost reached his first objective, the crossroad near Sombreffe which was the supply line back into Prussia. The second objective Sombreffe was at risk but the third, the crossroad near Wagnele (and a route to Quatre-bras) was quite safe as I had depolyed in depth there. However, my left flank guarded by Theilelemans III Korps was too weak and got rolled up - losing five units to recoil - whereby they retreated into places they couldn't! I managed to blow away a unit of French hussars with a lucky musketry role but that was about as much harm I inflicted.

Impressions: I like the command point system, for each C&C and subcommanders you role a D6 and the numbers pips indicates the number of units you can move. While I thought the artillery was not particularly bloody it did give a sense of pushing back attacks as happened in real battles. However, I recall that my experience of artillery is rather sanguine after the Ayton games! So in reality the artillery rules seemed to work well.

Here are some pictures, the first two or so are from the French side before troop deployments, the rest are all based from the Prussian viewpoint (when I remembered to take photos that is!). All in all I really enjoyed the game, it was really a pleasure to get the little chaps out on the table and throw some dice. 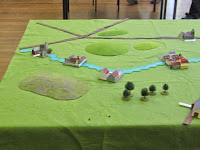 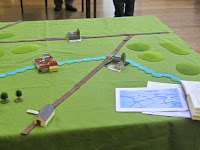 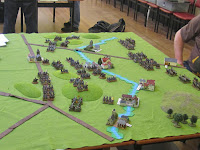 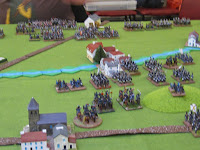 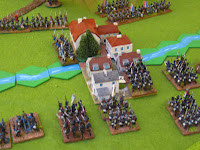 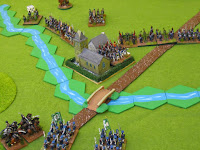 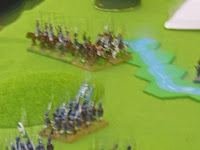 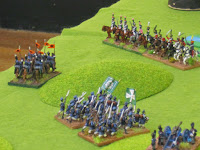 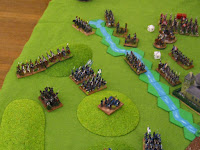 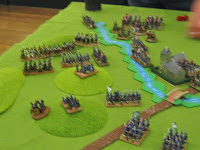 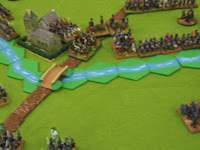 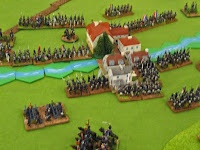 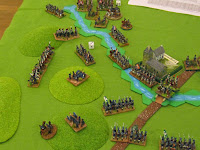 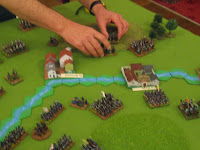 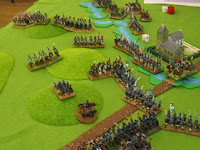 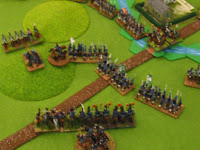