I played my first skirmish game at the club Tuesday night and it was quite fun. Karl hosted a game of Dead Mans Hand, there was the six of us in three teams of two. Yours truly and Steven were the Mexican bandits, Karl lead the other set of bad guys while Laurence led the good guys (US Marshals). Each team had about 8 figures (I managed to sneak in four of my Mexicans from the Ayton game). The objective of the game for the two bad guy teams was simply to wipe out the good guys. Even I understood that objective. The Marshals were holding out in the three level hotel building shown in the first picture. The second picture shows the Mexicans sneaking up at the back from the corral, not pictured is the other bad guy team taking up position at the front of the building.

The game was very enjoyable, its main mechanism is card activation for each character, a 1D20 is used for shooting with modifiers and 1D10 for morale. Figures have types such as boss, gunslinger, dude and varmint (in order of excellence of hit points, damage infliction and morale).  Each character has three actions, which can be all moves (10cm each) or shoots, or a combination. Each character can also accumulate tokens to identify status and injuries.

Our Mexicans infiltrated the hotel and started to give the Marshals some casualties and the bad guy team two was giving the Marshals equal hell at the front when all of a sudden the other bad guys started firing lead into our backs!  In a very confused shoot-out the US Marshals shot at bad guy team 2 and caused the majority to run away after they failed their morale checks, the last  of bad guy team 2 were eliminated by the Mexicans. Laurence (the lead Marshal) had a nasty habit of staying a floor two popping down to floor one for a crack at the Mexicans and then popping back up to floor two unharmed. Finally, the Marshall grew some balls and came down , shot my second remaining bad guy and tried to finish off my gunslinger character (Tuco), sadly for Lawrence Tuco was triumphant and the Marshal lay in a pool of his own blood. Literally the last man standing, needless to say he went across the road  to the Saloon for a shot of whiskey! 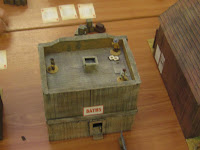 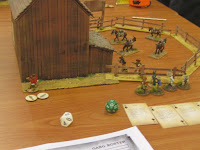 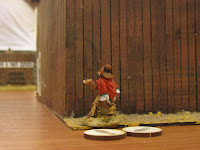 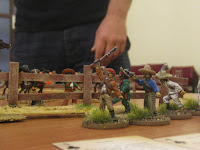 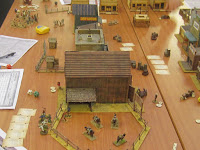