Here we have the WotR perry command set (Henry Tudor), I didn't like the HYW sets for the French so decided to get this one. I am not too happy with the faces, and had several attempts to repaint them with no joy. The flag is the Oriflamme (Golden Flame), the battle flag of France which was housed in the Cathedral of St Dennis and was periodically brought out for war - at Agincourt it was lost in the battle. This  one I printed out from WarFlags and painted over.

The last seven of my Front Rank men-at-arms are also completed, I converted one into a flag bearer - the arms of the Duke of Brabant (flag by Maverick models). The flags I've chosen all have the Fleur-de-lis, so the troops they are assigned to can be instantly identified as my French!

Well, thats the last of my HYW figures, I'll order some more in the New Year and now it's back to 15mm Napoleonics. 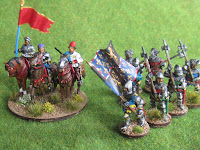 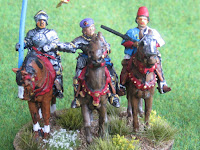 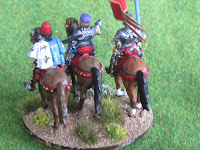 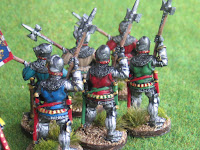 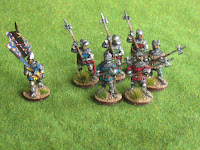 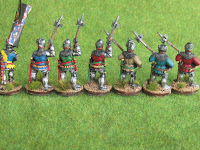 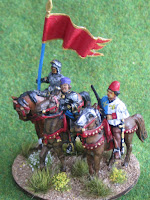