I took a few photos of a Pike and Shotte game myself and Ian had organized. This was a dry run for a game next week. The rules seemed more streamlined than Beneath The Lily Banner as the troops could march reasonable distances (6in for inf and 9in for cavalry), however depending on your command die role for the brigade you can do up to three moves at once. So the troops can really glide along and make contact! Taking three moves does forbid you from shooting. I never got to fire my artillery due to out of range and masking my own guns. The artillery is only really worth bothering with at short range.

The figures are our 28mm WSS, mine are Imaginations but with French flags! Ian's are Austrians with the correct flags! My apologies for the quality of the pics but what with the bad light in the hall and my shaky hands nothing better can be expected.

A lot a bad dice throwing and neglect to fire a volley before I went in to melee led to the destruction of my army. We managed to do quite a bit in the three and bit hours (6:30-10:00). So definitely, thumbs up for Pike and shotte. 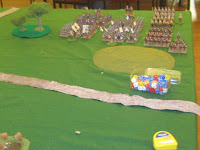 setting up, all my troops on table 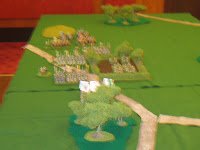 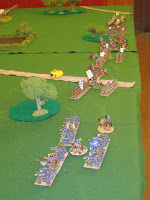 We took it in turns to place our brigades 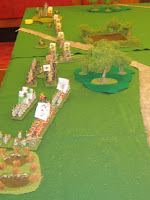 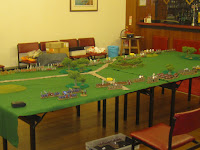 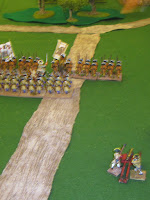 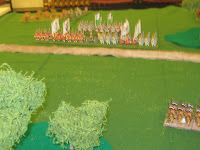 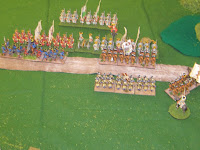 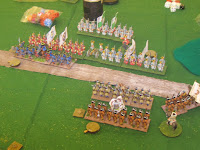 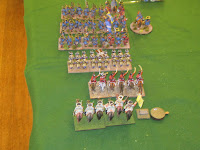 My casualties! Six routed regiments.
Posted by Ken at 17:45