The Chasseurs took a bit longer than expected, partly because I'm a slow painter and the urge to paint left me for a few days. Well, here they are. They are based five to a 60x40 base purchased from ERM, I use "no-more nails" to stick them and the flock (sand mixed with fine talus) into position. I then painted the bases with a watered down light earth colour and then after it dried dry brushed with lighter colours. The grass tufts were added last. Finally, I cut out the self-adhesive magnetic material and placed it on the bottom of the bases. This allows the figures to be placed on metallic/ferric surfaces and makes for safe storage and transport.

Although I make four bases per unit (20 riders), I always have a second command stand to enable two units to be made as I'm trying to make a regimental version of Grande Armee rules. For Chasseurs, Dragoons it is not a problem as several regiments had similar facing colours and so can easily make for generic units.The French hussars present a problem since they had unique uniforms, so I must build up a 20 man unit but only use a couple of bases for the higher level grand tactical games. 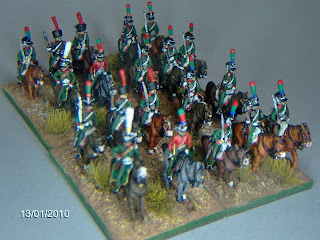 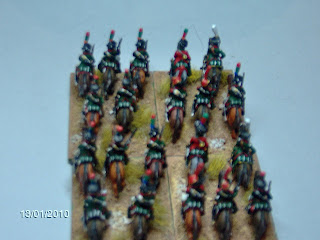 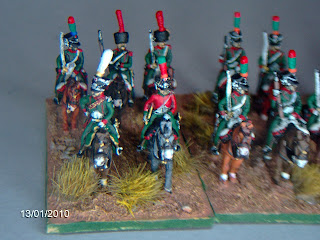 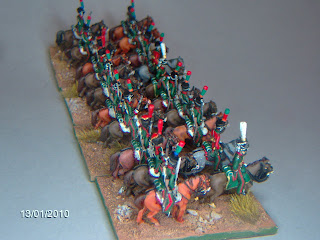 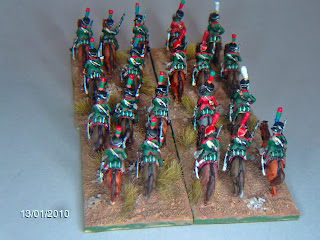 I often have second thoughts about the basing style I use. I think its to do with the larger depth versus smaller width of the bases. However, two bases placed side by side look fine. I do like the double row of troopers and the base itself has a nice heavy feel to it. For charging poses this is great, as you can stagger them for realistic charges as the riders would  get slightly disordered.

...and of course takes less effort to move them,rather than if they had been based three to a stand. Of course I cant make the long lines (abreast) which was a common tactic they used.

After the light cavalry I will build up a couple of bridgades of cuirassiers but will experiment with placing six riders to a base - to give a massed look compared with the light cav.
Posted by Ken at 11:11