Plans for the French Hussars

I will shortly start on two units of french hussars (1st and 4th) so I can complete Pajol's cavalry corps. I'll try and get the 4th to look like the dashing figures on the front of the General de Brigade rules book. It's from a painting by Edourad Detaille and obviously inspired Mr Andrew Barton since the 'superior officer' of hussars has exactly the same pose! His saddlecloth and breeches look black rather than dark blue.

Here is also a picture from Andre Jouineau's book 2 of Hussars. We see that the blue normally associated with the 1st hussars is a lot darker than usually depicted. 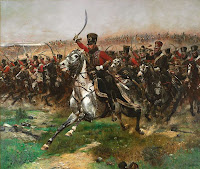