I got back from the Ayton game Sunday evening, this was an absolutely brillant weekend of gaming. Organised by Henry of BattleGames and hosted by the Ayton gamers, in particular Mr Peeler. Ayton is a beautiful little village a few miles west of Scarbourgh, I stayed in the East Ayton Lodge which was very nice. The majority of the other gamers who travelled down stayed at the Forge Inn. The games were held at the village hall was very light and airey.

The Friday we arrived was spent setting up the tables, in addition to the ImagiNation game there was a dark ages battle, a WWII game and a what looked like a cross between WWII and medievals? Then off to the pub for beer and food. Saturday we played several smaller sized battles that led up to the huge game on Sunday. My side gained the avantage and the enemy sued for terms of peace. 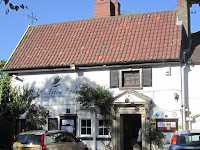 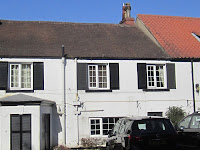 Another shot of the Lodge 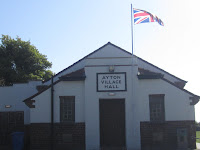 Here we have the main entrance to the village hall. 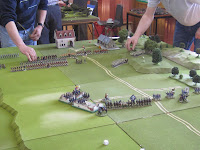 The gallant Baron Munchausen  faces enemy forces twice his number. One of his battalions enter a ruined village, one in centre forms line and the his right flank battalion are in open order. But where was his ally Viscount Gascoigne and his Gateshead lads? 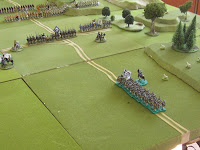 My chaps led by Viscount Gaiscoigne eventually make it on to the battle field - thanks to my indecisions, counter-orders etc we had missed our allies (the Baron Munchausen and his three battalions). They ended up fighting twice their number for several turns before I arrived. 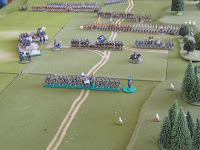 My lads form line from road marching and slowly enter the fray. The enemy forces were led by Buff Orpington and John (two fine chaps). 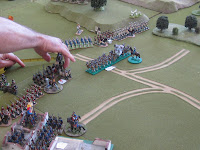 Baron Munchausen orders the central battalion to attack and causes a breakthrough routing several enemy battalions to his obvious great delight (he jumps up onto a chair and proceeds to do a little jig!). My lads plug a gap where the right flank is in trouble. 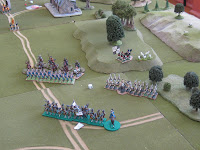 I'm about to face off against superior numbers when the Baron's cossacks suddenly appear in the rear of the enemy. These horsemen had been sent on a detour (during the campaign stages before we arriaved at Ayton) a slight misunderstanding on the Baron's part led him to think that the dotted lines on our map were the secondary road system - they were in fact borders between countries! So his cossacks wandered off scouting hoping to benfit from road march modifiers. Anyway they heard the gunfire and returned to rout the enemy in the rear. 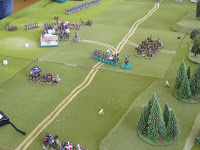 The close of day one with both sides withdrawing - I suffered enough causualties and had to retreat to edge of table to recover morale and reorganise.
Posted by Ken at 12:20