Next on my list of things to do are some AB French dragoons (at rest pose), these will have yellow facings to distinguish them from the red and pink regiments. Depending on how I feel I may progress on with a horde of Prussian hussars (AB) or a batch of three battalions of Portuguese line infantry (OG).

I also received a couple of packets of OG Peninsula British Elite pose in 'at ready' and 'march attack' in stovepipe shako, I'll think I'll stick with the march attack pose as it looks decent enough.  I would like to use AB's for all my infantry but OG is the cheaper and more doable option. 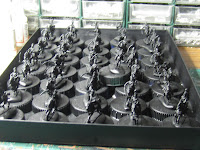 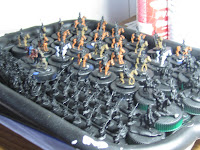