This is my first post of 2016, I'm ashamed to say. Although I've been playing games a plenty at the club I've almost lost the desire to paint. Well, anyway here is my first offering for 2016, they are plastic yuck! but this is a result of my visit to vapnartak at York in February. I spotted some Perry metal sergeants and should have bought them on the spot but I went for a wander around the other stalls and when I returned they had gone! So not wanting to leave empty handed I got the next best thing. They aren't bad sculpts actually! I just have to decide on pennants for them, they will form two units of six riders for Lion Rampant.

I did notice that during my absence that the number of visitors reached over the 100,000 mark and many thanks to all those who have paid a visit and commented over the years. 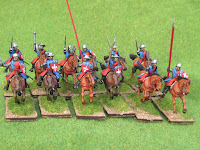 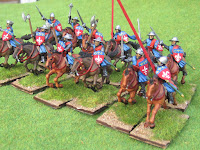 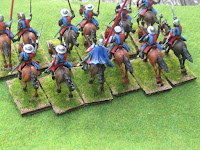