This is the other half of the OG Highlander pack with command (50 figures so I can get two units). The 79th have these nice green facings which goes well with the rest of the uniform I think. Upon closer inspection the two bagpipers  appear to lack the 'drones' so I don't know what kind of noise they could actually make! I placed these at the back of the command stand so not to be too obvious! I think its a sculpting error rather than a casting one. The 79th (Cameron Highlanders) served in the peninsular war as well as the 100 days,during that time they were part of Kemps brigade and were present at Quatre-bras and Waterloo. This regiment was raised in 1793 and finally merged with the Seaforth Highlaners in 1961. During Dunkirk they wore the kilt which was the last time these were ever worn in battle. 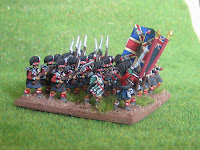 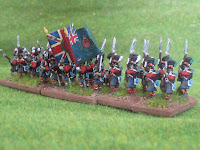 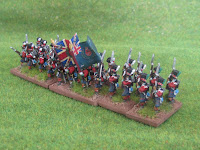 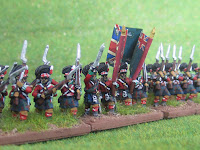