These fine looking chaps are the 2nd Battalion of the 3rd foot guards (Scots), although the 2nd battalion did not particpate in the Peninsula campaign they served with distinction at Waterloo. The Grenadier and center companies were positioned on the ridge just behind Hougoumont, the light company was placed in the chateux itself along with the other light company and was commanded by Colonel Macdonell. After many close calls they killed the few Frenchmen who actually made it inside - apart from one drummer boy! Finally slamming shut the gates and ignoring the flames when howitzers set some of the buildings ablaze!

The figures are AB and the flags are by GMB. Just to make them different to my line redcoats I gave these guys white trousers and of course the lovely regimental colours sets them apart also. The eagle-eyed will notice that they are uniformed for the Peninsular with their stovepipe shakos but have the Waterloo flags! Now I just need to complete another three of these! 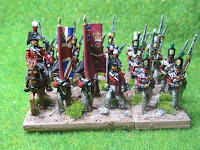 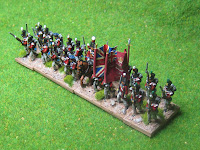 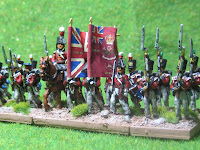 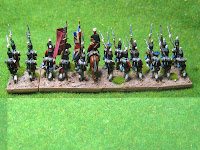