One thing my armies have been sadly lacking are ammunition caissons and supply wagons. So I ordered 2 x large supply wagons packs and 2 x ammunition caisson packs. Each pack comes with two vehicles, the others will be painted up for the allies. These are of course old glory 15mm, they were easy to assemble (superglue) and with a bit black wash have turned out reasonably well. I did add two extra horses to the wagons to make up the numbers to four horses with two outriders riders (the caissons came with four horses).

My first 1814 battle (Brienne) scenario calls for a Prussian supply train to used as part of the French victory conditions, so they won't just be used for eye candy! These French wagons will have double up up as Prussian/Russians since the train stretches across the table. The vehicles are based on 100 x 40 mm MDF with magnetic backing. 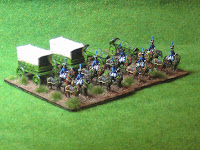 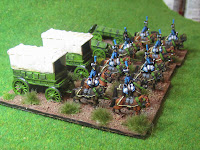 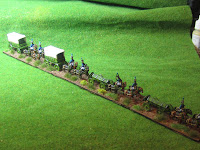