Well, here he is with Marshal Ney and three others somewhere in France during the 1814 campaign. The Napoleon figure and Ney are by Warmodelling (a.k.a Fantassin). In fact this company has created about six or seven versions of Napoleon based on the different campaigns. I gave Ney the usual blue cloak rather than the brownish one that Messionier has depicted him in. The two similar looking generals are AB but the middle one is an AB body with a Warmodelling headswap (why? because he was a colonel in shako and it was the only spare general head I had). Well, there they are with their cloaks and greatcoats in the miserable winter of 1814. Not my greatest of command bases with such a mix of figures. 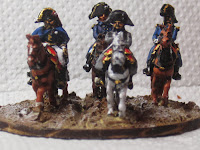 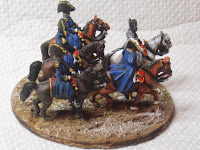