I painted up three old glory Russian units, the pink & green flag belongs to the Troitsk regiment, the red & white to Vilno and the yellow flag identifies the Odessky regiment. The flags are from Maverick models, I always remember now to touch up the edges of the flags with paint to cover white bits. These are the last of the road march pose, probably not the best of the OG sculpts. I replaced the flag poles which were a bit short with metal spears I bought from the York wargame show a few years ago. I also had to convert a couple of officers to standard bearers since I didn't have enough to go around!

Next to be completed will be the Napoleons Old Guard Grenadiers (again old glory) and some Russian cavalry (Fantassin/warmodelling), hussars, cuirassiers and dragoons. 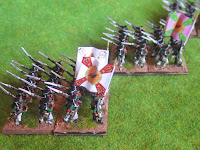 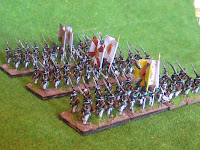 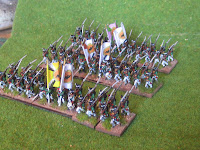 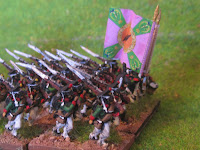